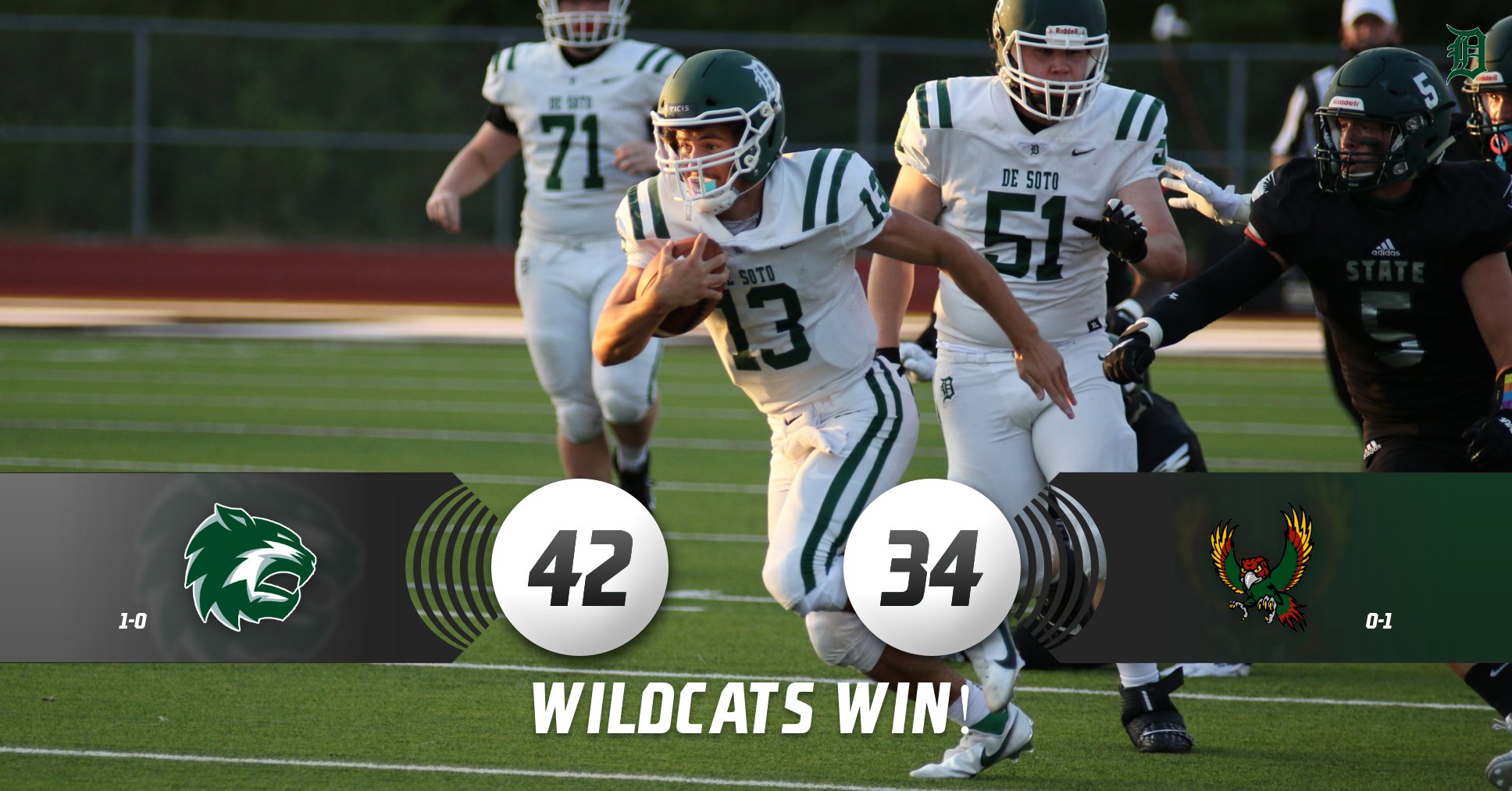 The Varsity Football team traveled to Lawrence Free State High School on Friday, September 4th, 2020. The Wildcats offense came out firing on all cylinders as they put up 21 unanswered points in the first quarter. The first touchdown came on a Garrett Kellner 1 yard run, the second on a 20 yard run by Jackson Miller, and the third was a Jackson Miller bomb of nearly 80 yards to Austin Tabor. Luke VanBooven added all 3 PATs. The third touchdown was setup by a Wildcat defensive takeaway which came from a Zach Willis interception.
During the second quarter Free State got their offense rolling, they scored at the 8:57 mark to cut into the De Soto lead and the game was at 21-7. The Wildcats responded with another touchdown, this time coming on an Ethan Schultze 6 yard run and VanBooven added the PAT once again. Then right before the half the Firebirds found the endzone which would take the halftime score to 28-14.
Free State scored first during the 3rd quarter to make it a 28-20 game, but then Jackson Miller connected with Austin Tabor for a second touchdown, this one coming in on 32 yards through the air. VanBooven added the PAT and at the 5:20 mark in the 3rd Q the Wildcats lead Free State 35-20. Free State found the endzone a second time during the 3rd Q which would brought the score to 35-27 before entering the final frame.
During the 4th quarter Tyson Priddy scored on a 30 yard run at the 11:19 mark and a VanBooven PAT brought the score to 42-27. The Wildcat defense got a second takeaway on the night at the 5:15 mark by an Aabiyas Wakes interception. Free State scored a late touchdown and the final score ended 42-34.
Jackson Miller led the way with 146 yards rushing and 126 yards passing. Miller had 1 rushing touchdown and 2 passing touchdowns.
Tyson Priddy rushed 6 times for 95 yards and a touchdown. Tyson also had 2 receptions for 16 yards.
Garrett Kellner rushed 10 times for 42 yards and a touchdown.
Ethan Schultze rushed 5 times for 20 yards and a touchdown.
Tyler Schultze rushed 4 times for 18 yards.
Austin Tabor had 3 receptions for 109 yards and 2 touchdowns.

The Wildcats will be at home on Friday, September 11th vs. Mill Valley with a 7:00pm kickoff.