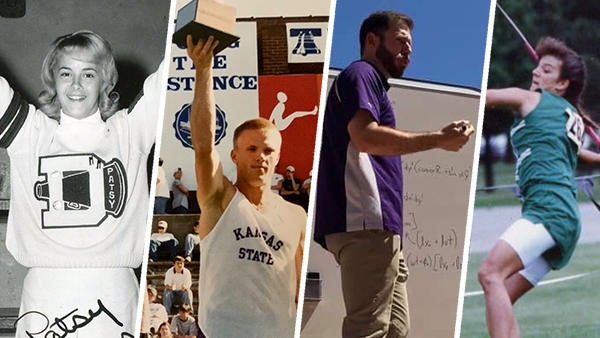 Carrie Buckley – DHS Class of 1992
Athletics
As a Wildcat a three-sport athlete participating in Volleyball, Basketball, and Track & Field from 1989 to 1992. Selected three times as an All League Volleyball player and All League basketball player. She was a two time State Champion in the Javelin and also a state placer in several other events in Track and Field. Selected for the Sports Illustrated Gatorade Circle of Champions as well as a 1st Provisional Olympic Qualifier. Carrie continued her Track and & Field career at Wake Forest University where she was an ACC Academic All American, broke the Javelin and Long Jump records, was selected as ACC 1st Team, and was a part of the 1993 ACC Championship team.

Ryan Johnson – DHS Class of 1992
Athletics
DHS three-sport athlete participating in Cross Country, Basketball, and Track & Field from 1988 to 1992. Three-time state placer in Cross Country with a State Runner Up finish in 1991. Also a two time Track & Field state champion with the 1600m in 1990 and the 800m in 1991. He broke the DHS 800m, 1600m, and Cross Country 5K records over his high school career. Ryan continued his running career at the collegiate level at JCCC and K-State. Three-time All American at JCCC and then while at K-State he placed in the 800m at the All Big 8/Big 12 Conference meets in 1996-1997.

Please join us for the DHS Hall of Fame Recognition which will take place on Tuesday, February 11, 2020 in the Main Gym in between the Varsity Girls & Boys Basketball Games. There will also be a banquet/reception held prior to the recognition in the Black Box for Hall of Fame Inductees, families,  and friends.